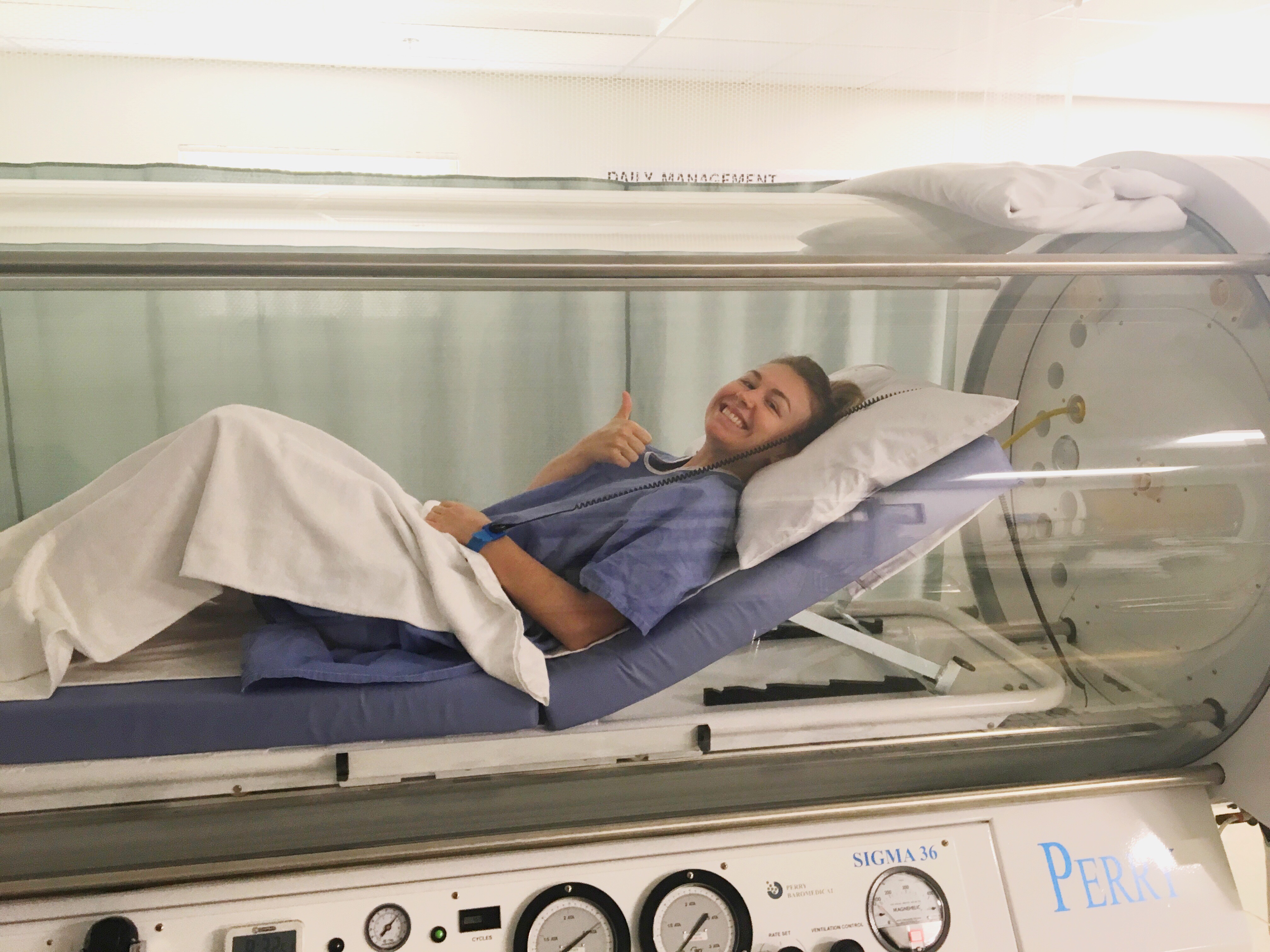 I recently completed my 40 dives (sessions) in a hyperbaric oxygen chamber as part of my Lyme treatment.

Hyperbaric oxygen therapy (HBOT) is most commonly used for wound healing (often diabetic ulcers) but can also be used to effectively treat Lyme Disease. The combination of breathing pure oxygen at a higher pressure allows the lungs to receive high levels of oxygen which then saturates the bloodstream and delivers high levels of oxygen to the affected tissues. Damaged, or sick, tissues need more oxygen than normal to survive so by oversaturating the body with oxygen, it restores the oxygen balance and allows the body to properly heal. (Source)

All of this works to fight Lyme in a few different ways. First, it directly kills the Lyme bacteria. Borrelia burgdorferi are thought to be anaerobic which means they survive in places with low oxygen levels. Flooding these ‘low-oxygen’ areas of the body with high levels of oxygen disrupts the bacteria’s metabolic function and kills them. Additionally, the oxygen enhances the effectiveness of white blood cells responsible for killing infection.

The second way HBOT works to fight Lyme is by augmenting the work of antibiotics. Certain antibiotics depend on oxygen for transport throughout the body, so by having HBOT while on antibiotics it can make them more effective. (Source)

So yeah, that’s how it works! This is me and my tube.

I spent 60 freaking hours in this thing and went to the office 40 times over 2 months. I went anywhere from 2-5 times per week, depending on how much I could tolerate. You have to wear a 100% cotton gown washed in special detergent because everything is a fire hazard at 2.4 atm and 100% oxygen. I did not want to catch on fire. So I obliged. For the same reason, you can’t bring anything into a tube like a book or phone. Each hamster got their own TV though so that was nice. But it didn’t have Netflix or Hulu?? They had these things called “DVDs”…? Its like a disc thing and the movie is on it? Or something. Anyway, I had to find 60 hours of those weird “DVDs” which was not easy.

Once I got into the hamster room, there was a huge list of questions they had to ask me each time before they locked me in my tube. Did you have any carbonated beverages? Any jewelry on? Oil or petroleum products? (like I said, everything is a fire hazard and I did not want to spontaneously combust). Then they hooked me up to a ground wire and looped it around my wrist. This was to discharge any static that was created so I didn’t, ya know, catch on fire. Then they slid me in and locked the vault door! It took me 10-15 minutes to reach full pressure each time. It makes your ears pop a ton as they work to equalize the pressure, but once you’re at pressure it feels pretty normal! I always felt heavy-ish and weighed down. Then after an hour of being at pressure, they’d bring the pressure slowly back down over 10-15 minutes so my ears could equalize pressure again.

When B.burgdorferi are killed, they release toxins which make you feel ~*even W0R$E*~ than you previously did. Even when you don’t think that is possible. It happens anyway. It’s called a Jarisch-Herxheimer reaction, but everyone just calls it a ‘herx’ or says they’re ‘herxing’. It’s a detox reaction as your body processes the high levels of die off (caused by HBOT in this case). Pairing this with the die of from my antibiotics was super fun really pleasant would recommend absolutely lovely a real walk in the park luxury vacation.

In a way though, those dreaded Herxes told me the treatment was working. I especially noticed a difference when I was getting IV antibiotics at the same time. Apparently the augmentation is even more extreme with IV antibiotics versus oral antibiotics. This was when I really noticed my brain fog start to lift and began to feel like a semi-human again! *cue Human Again from Beauty and the Beast – one of the discy things I watched* Most times in my hamster tube I’d have 10 ish minutes of some random pain somewhere in my body. Occasionally my muscles would start to spasm, and early on it made me pretty nauseous but all of that got better as the treatments went on and by the end I was an old pro.

A huge milestone and big celebration. I really bonded with the people in that office. I mean Ken* and I watched all 8 Harry Potter movies together. How many people can you say you’ve done that with? It is a special bond. Samantha* took my vitals 40 times and every time my blood pressure was above 90/55 we celebrated. I have really low BP and it stayed very low during treatment, but I always felt better when my BP was closer to 100/60.

A huge thanks to my hyperbaric team who will never read this.

It has been so nice to not have to wake up every morning, be to the office by 8:20, get my vitals taken, change into my pretty hospital dress, lay in a tube for 1.5 hours, change again, drive over to the IV unit, walk what seemed like a really long way but was probably only 20 feet, get some IVs, drag myself 20 more feet, and finally go home. Eeevery day. (keep in mind I still wasn’t able to drive at this point so Mom Hero and Liney were my daily chauffeurs).

So yeah. It’s nice to not have to do that.

Sometimes healing doesn’t mean multiple appointments every day. While those are necessary at points, sometimes it is just as healing to have a break and remember things that fill you up.

I’m really enjoying sleeping as much as I need to, and have started to do things that regular people do! I’ve gone to the grocery store a few times, I’ve been working on some sewing projects and thrift flips, I’ve started to help prepare my own meals, I’ve gone on daily walks in an attempt to not turn into a total blob. I still watch at least 1 movie a day, I really got used to my hamster tube movies and I wasn’t ready to let that go. I’m telling myself it’s a course in pop culture education…

I may have to do some maintenance hamster tube treatments, but until then I’m living life not like a trapped rodent. And let me tell you. It’s luxurious.

P.S. Some exciting website updates!! I finally made an “About” page in case you don’t know who I am. I also added a “Resource” page that I’ll continue to update. It’s a place where I’ll put information on Lyme Disease and some other things that have helped me the past year.

Also, if you care about other words my brain strings together and puts on the internet, subscribe!! Just put your email in and you’ll get a message every time a new post is published (no spam, promise).